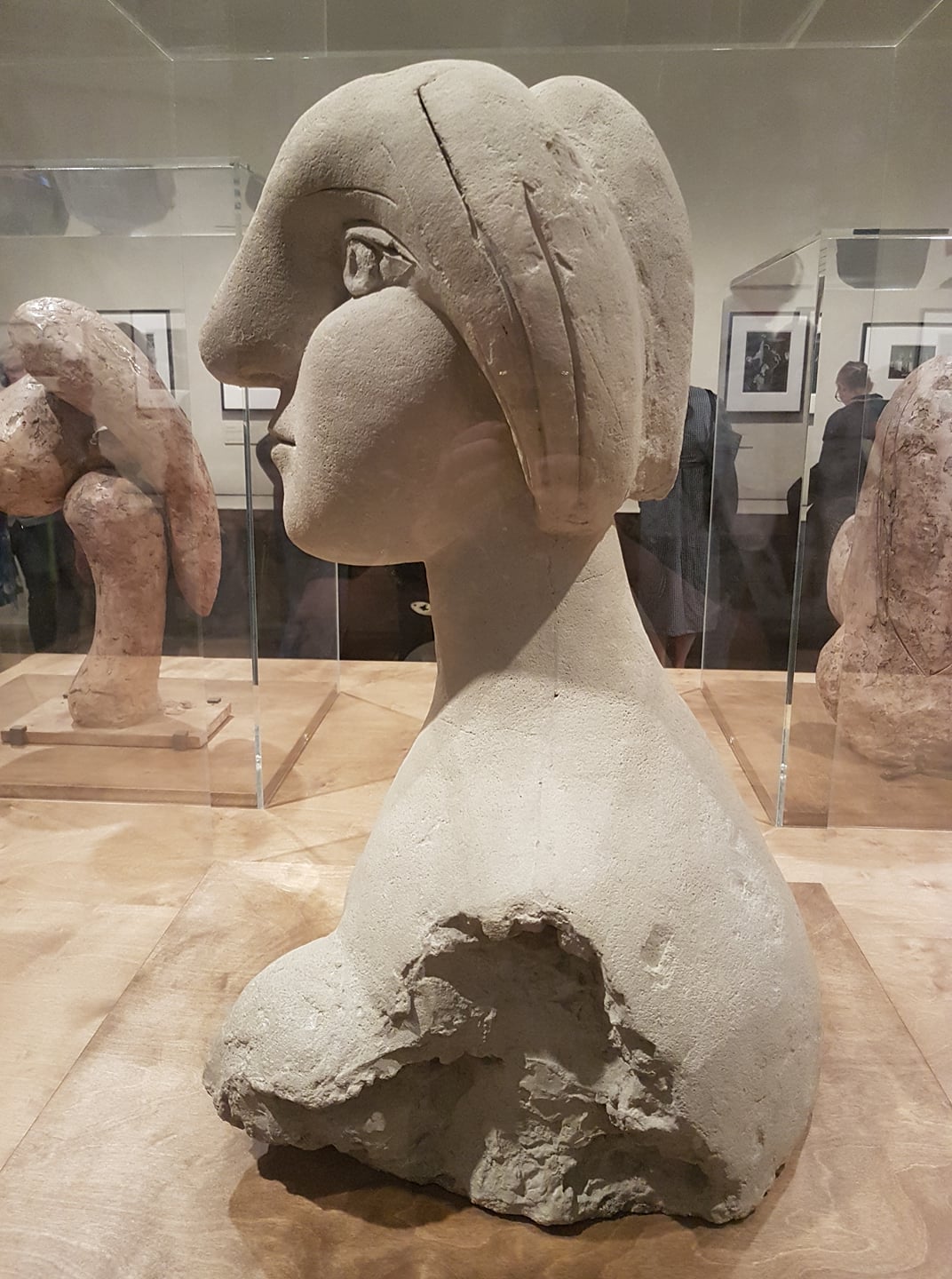 Last week I was lucky enough to visit the Tate Modern in London to see the Pablo Picasso exhibition ‘1932 – LOVE, FAME, TRAGEDY’

I knew a little about Picasso’s life but this visit was a real education about who he was, not least how he divided his time between his wife Olga and his son, and his lover Marie-Thérèse Walter. The narrative to the journey through Picasso’s paintings in 1932, which were primarily studies of Marie-Thérèse in various styles and mediums, included a quote from a fellow artist who describe her as ‘changing like the wind – she could be smiling then angry in the same second’. This is illustrated in the painting Girl Before a Mirror, where Marie-Thérèse appears as two people; happy Marie-Thérèse and angry Marie-Thérèse.

The paintings of her are, in some cases, highly sexualised and objectified, with Le Rêve

portraying her apparently dreaming with a penis attached to her head. But, overall, I got the impression that, despite being his mistress, Marie-Thérèse was a woman who would take no shit. She was a woman on a mission  – a mission to get Picasso. When he went back to his wife she would go on holiday to the South of France. And, towards the end of the exhibition, we are informed that she eventually resorted to the ultimate mistress trump card of becoming pregnant, in the hope that this would somehow magically change a man who feels it is right to cruelly deceive. Predictably, it did not, and Picasso left her in 1935 for the next in a long line of women in his life. If I were Marie-Thérèse, I would have been angry too.

The Girl in the Mirror is Picasso’s observation of the ‘two sides’ of Marie-Thérèse, pulled out and committed to canvas as remarkable worth commenting on. Her angry reflection is portrayed as coarse and ugly, raw. Marie-Thérèse’s anger seems, to Picasso, abnormal, in a world where women are valued for calm and composure, even in the extreme emotional situation she found herself in.

Angry is not popular. Not for women. In one of my novels, The Truth Keepers, Kate Morden is angry at her father for leaving her and at life. She is involved in the Iraq war and angry at the fate of civilians, including her friend Saana, and the treatment of dissidents. Yes, Kate is really fucking angry. This is clear throughout the novel, yet Amazon reviewer (Mike) says:

This was actually a different espionage story line. It would have been good and I would have given it 5 stars, except for the main character, Kate Morden. One angry lady. Everything and everyone pisses her off, she’s constantly annoyed and irritated. She’s condescending, treats everyone like they’re beneath her and always with a temper. I was initially going to look at this author’s other books (detective stories), but don’t want to waste my money now. The lead character might be the same. Don’t know why the author has such an angry lead character. It really distracted from the story.

Similarly, there was a division in reviews for what ‘Mike’ describes as ‘detective stories’ which feature DS Jan Pearce as she hunts for her missing teenage son. Why is she so upset, ask some of the reviewers? Why is she emotional and angry? Why does this woman who suspects someone has kidnapped and perhaps killed her son swear so much and eventually strike out angrily alone when no one helps her?

Are we so used to passive women in art that an angry woman is completely surprising? Or is this a reflection of the oppression of women, where it is much better/easier/compliant for everyone else when we are smiling and pliable than when we are fucking fuming? Is this why the #metoo campaign has taken so long, because women’s anger is so unacceptable that, in order to survive in the world we have to smile, look seductive-on-demand and sob gently into our handkerchiefs instead of raising our voices and seething?

My next novel, Perfect Ten, introduces a very angry lady, Caroline Atkinson. She is on the losing end of a relationship and wouldn’t it be nice for her husband Jack if she would just smile and let it go? Not be angry. Play the game. Move on.

She doesn’t move on. Far from it. She makes him pay.

But you will have to wait until September 6th to find out exactly how livid Caroline is, and what she does about it. And how, in parts, the story it mirrors Marie-Thérèse’s and other women’s plight when faced with infidelity.

What would YOU do?