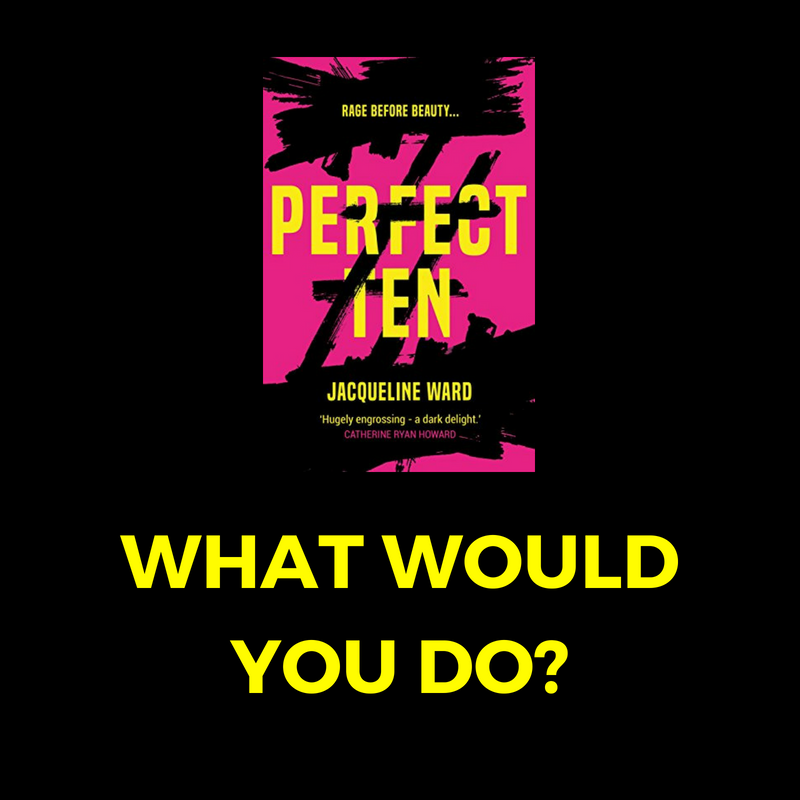 With reviews coming in thick and fast for Perfect Ten, I wanted to dig a little deeper into Caroline’s character and her choices.

Right from the outset, from my submission to agents and then editors, there were worries over Caroline’s choices about getting revenge on her philandering husband Jack. Would she be sympathetic enough? I intentionally wrote Caroline as an educated woman with a good job because I am tired of the endless passive women in commercial fiction involving domestic abuse stereotype, helpless and waiting to be saved. I wanted to write about a flawed woman who saves herself against all the odds.

There is nothing passive about psychological abuse. It has devastating consequences that skews the world of these affected and affects even their everyday behaviour.  Some early reviewers have noted that Caroline appears ‘mad’ in the first part of the book and wonder of Jack is right about her. Which means that although we do not see Jack, his work is done. Caroline is so damaged by Jack’s abusive behaviour that she loses all self esteem and retreats within herself.

When you are a victim of psychological abuse, at first you doubt yourself. How can this person I love and claims to love me be so cruel? You are living a surface life outside, at work, shopping, picking the kids up, but underneath it is a different story. Inside, you are full of fear, wondering what is happening in your relationship, and what would happen next.

You try to please them.

You start to ignore your suspicions because they make fun of them, suggest medication, therapy. You are imagining it. They express concerns over your mental health, wondering if you are ‘good enough’ or ‘well enough’ to do day to day tasks, then constantly criticise. They are always right, because if you think they are wrong, they punish you – no money, no freedom to talk to others, no sex, too much sex, restricting movement.

Sometimes obvious, sometimes so subtle that you even doubt that, but enough to make you scared of what might happen next. They insinuate that your behaviour is ‘bad’ – you eat too much, you look at other men, you smell, you laugh too loud. You are ugly, really. Old. Fat. Stupid. Then they isolate, because what if someone spots what they are doing? They tell you everyone else is a liar and that no one cares. As you lose sight of the outside world and focus on the person who is hurting you because the are operating a Pavolv’s dog type reward system, you stop believing even yourself. Your strength ebbs and 100% of your time is spent in fear, trying to avoid the punishment by ‘being good’.

Your decision making process is influenced by the abuse you have been or are suffering – you are mentally unstable. It isn’t just a ‘pull yourself together’ unstable, it’s the consequences of trauma and abuse. You pull up the last bit of strength you have and try to tell people what is happening to you  everyday in your own home, but it is too late. You abuser has whispered your madness, and they are ready for poor, needy, insane, ‘bunny-boiler’ you. They turn away, because you are wrong, bad, you are desperate and they don’t want to get involved.

What you do next is a direct consequence of what this abuse has done to you, not madness or badness. It is a last ditch attempt to save your ‘self’ as you feel yourself slipping into – nothing.

Those words entered the dictionary because of the 1997 film Fatal Attraction, where Alex Forrest boils the pet rabbit of the man she is pursuing. Glen Close, who plays Alex Forrest in the film, says this about her:

“I took the script to several different psychologists and said, ‘Please tell me if this behaviour is possible?’ ” says Close.  And the answer? “Oh, yeah.”
Close’s theory on Alex’s backstory: She was a victim of incest in childhood, prompting her mental instability.
“And it was that exploration that made me really love Alex and allowed me to have great empathy with her,” says Close. “I have never thought of her as one of the great evil characters in the 20th century.”

I would contend that the demonising of women who take revenge or act out of character after psychological abuse is part of the cycle of abuse and control but on a larger scale – one that many people are caught up in. Not only is Jack telling Caroline she is mad, but he is telling their friends as well. And when she breaks down because of his abuse, they nod and sigh and agree with Jack, because he is right, isn’t he? She IS mad. She IS incapable.

The dramatic value of revenge in the entertainment industry, along with the objectification of women, has perpetuated this cycle to such an extent that it has become cultural. It has normalised women’s behaviour as sweet and patient and passive so someone like Caroline or Alex Forrest is ‘other’ – abnormal and therefore worthy of even more critique, while the abusive men in their lives are accepted as the boys-will-be-boys ‘norm’. For example, some readers are outraged that Caroline sleeps with married men after her divorce, but do not mention Jack sleeping with married women during their marriage and keeping a journal and photographs.

In Perfect Ten, the issue of psychological abuse is the subtext behind the rollercoater ride of revenge that Caroline embarks on. I wanted to write outside that cultural appropriation of the ‘mad woman’ or the ‘bunny-boiler’ and dig deeper into why those choices are made. I am not defending them, or endorsing that behaviour, rather, asking readers to glimpse the reason why. Enough people in publishing – my wonderful agent and editors – saw this and understood.

It remains to be seen how many readers will see the subtext, or if they will perceive Caroline exactly as Jack wants them to.

I will be engaging with readers in the coming months to find out more about what they think about these issues, and after publication readers will be able to have their say – watch social media for clues. Leave your reviews on the deeper issues of Perfect Ten – I am interested in ALL reviews.