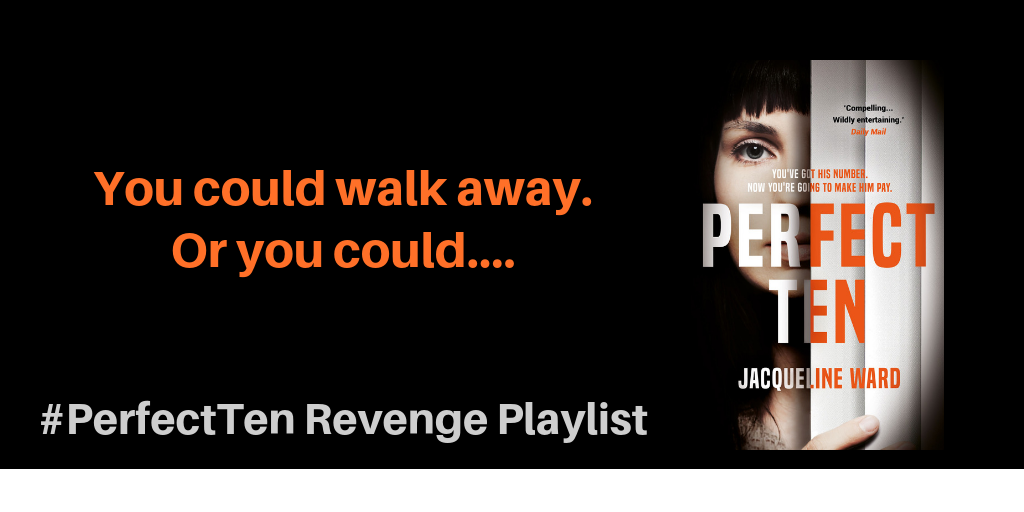 Perfect Ten has a theme of revenge, and while that is not the only theme of the story, a series of revenge songs are scattered through the story; in fact, Caroline Atkinson makes her own ‘Cheating Bastard Playlist’! And here it is:

I think it would be fair to say that Caroline Atkinson is angry. In fact, she is livid, and her playlist reflects this. So what better song to start with than ‘You Oughta Know’ by Alanis Morrisette? Caroline has found out her husband has cheated and this is her opening lament.

There You Go by P!nk is in many ways the ultimate revenge song. It drills down to the raw feelings of betrayal, then the betrayer coming back for another try only to be met with a ‘fuck you’ attitude. Actions speak louder than words, don’t they?

Irreplaceable by Beyonce. I get the impression from this song that it’s about a woman who’s boyfriend thinks she has been played being the real player. I had this in mind while writing Perfect Ten, that arrogant stupidity that makes a game player think that they have privileged knowledge, when really they are transparent, and this song typifies that situation.

Changed the Locks by Lucinda Williams features in The Affair, a TV show that looks at how each of the characters affected by Noah’s affair with Alison. His wife, Helen, has a scene where the gets high to this song, and this resonates with Caroline’s demise/rise, as she chases first Jack and then herself in circles.

Love yourself by Justin Bieber is a masterpiece in cold-hearted gleeful revenge. Caroline’s gradual realisation of Jack’s narcissistic behaviour culminates with this. The lyrics are a put-down of genius proportions and designed to hurt. Deep.

Tori Amos – Northern Lad.  Tori is a genius of storytelling, and anyone who has ever had a dying relationship knows the truth in this song and when it’s time to ‘turn the page’. Caroline did and this was the catalyst for change for her.

Northern Soul classic, The snake, by Al Wilson, hold the suggestion that the tender ‘silly’ woman knew what she was taking on with the snake and therefore whatever happened was her fault. This reflects the insidious nature of gaslighting and victim-blaming by Jack in Perfect Ten.

DOA by the Foo Fighters. No one’s getting out of here alive. Everyone’s damaged. No one ever wins in battles like the one between Caroline and Jack, but hopefully lessons are learned. Game on.

Little Mix and Shout Out to My Ex. If I am completely honest, this is the song I had in mind for Caroline as she walked away from the story; it didn’t quite turn out quite like that, but I held that thought anyway because this is the ultimate revenge: being OK afterwards.

Last but not least, a song which doesn’t get a mention in the book but is my personal mantra for anyone who has ever hurt me! As Caroline says so often, Fuck You! (not you, reader, but all the ‘Jack’s’ of this world who selfishly weave a tangled web of lies and drive others to the very bottom, then point the finger of blame at them.) Lily Allen’s anthem sums this sentiment up perfectly!

There are many more revenge songs that I could have included, but the songs above are the best stories to compliment Caroline’s journey. I hope you enjoy Perfect Ten – please let me know what you think.